Hottest of the hot: Extreme heat in Australia

2019 saw Australia swelter through its hottest and driest year ever recorded. 2019 was also the second warmest year on record for the entire planet. Though 2020 is set to fall during a La Nina event, our recent spring was the hottest on Australian record. More broadly, the World Meteorological Organisation confirmed that the last five years were the warmest on record globally, too.  Time and time again these records are being broken, clearly showing that global temperatures are on the rise. This is climate change. 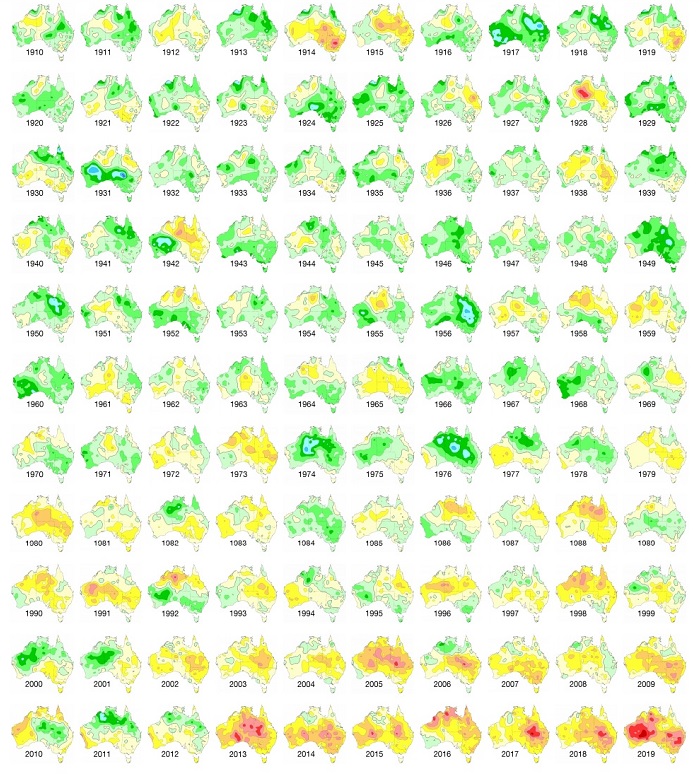 Temperatures across Australia over the past 110 years. Credit: Bureau of Meteorology, via ABC

Climate change is being driven by the burning of fossil fuels like coal, oil and gas. Not only does climate change mean overall temperatures are steadily increasing around the world, it’s also making hot days hotter, and heatwaves longer and more frequent. This has flow-on effects for other types of extreme weather, like bushfires, with fire seasons now starting earlier and lasting longer than they used to.

– Surviving a heatwave
– How to take care of your pets during a heatwave
– Dangerous summer 2019-2020 report
– INFOGRAPHIC: this 140-year heat map shows a clear trend in global temperature change

“The record heat is a warning. The experts have been telling us for decades that it will get hotter and weather events will get more extreme. The fires, the heat and the smoke must serve as a massive wake up call. We must heed the warnings. To protect Australian communities we must phase out coal, oil and gas, the drivers of climate change,” Climate Council CEO Amanda McKenzie. Last summer was Australia’s hottest on record, with 206 records broken in just 90 days.

Australia is one of the most vulnerable developed countries to climate change. Already, our communities, ecosystems and broader economy are being ravaged by droughts, floods and bushfires. We’ve lost an estimated 50% of the hard corals on our precious Great Barrier Reef from bleaching events caused by marine heatwaves, and in the 2019/2020 bushfire season alone, over 10 million hectares have been razed to the ground in what’s shaping up to be the worst bushfire season on record.

As a nation, we can no longer afford to sit by the sidelines. We need to play a much bigger role in tackling this global issue, by urgently reducing greenhouse gas emissions and ramping up the transition to renewable energy and storage technologies.

By elevating the science and putting the impacts of climate change front and centre, we’re empowering all Australians with the knowledge and tools to pressure the Federal Government into taking real action.

Can you chip in today to fund our critical ongoing work?