What are fuel efficiency standards and why am I hearing so much about them lately?

Fuel efficiency standards cover 80% of the global car market, and Australia is one of the only wealthy countries without them – alongside Russia, Indonesia and Turkey.

With a new Federal Government in charge, there’s a renewed opportunity to put strong fuel efficiency standards in place that will help us cut Australia’s emissions this decade and beyond.

Personal transport is one of Australia’s fastest growing sources of greenhouse gas emissions. Cars and light commercial vehicles alone make up over 60% of Australia’s transport pollution levels. This is largely due to our petrol-guzzling cars which produce up to 40% more carbon dioxide than their European counterparts due to our dirty and inefficient fleet.

If Australia had fuel efficiency standards in place since 2015 when the last Federal Government considered them, we would have prevented 9 million tonnes of carbon from being emitted. That’s the equivalent of a year’s worth of emissions in domestic flights.

Rapidly implementing robust fuel efficiency standards will enable Australia to attract low and zero emissions vehicles rather than being a dumping ground for highly polluting guzzlers.

Why are fuel efficiency standards good for household budgets?

Introducing strong fuel efficiency standards is the best way to cut costs for Australians while cutting our emissions for the future.

At the moment we have the perverse situation where only those on the highest incomes can afford to make savings by buying an EV. But imagine the difference it would make for the most vulnerable Australian households if they could free up a few hundred dollars a week by no longer paying for petrol.

What are the main obstacles to introducing strong fuel efficiency standards?

A number of car markers have vested interest in continuing to sell dirtier cars in Australia and delay the introduction of electric vehicles. They want to continue business as usual without being penalised for failing to meet efficiency standards. They can use Australia as a dumping ground for high emitting vehicles while selling zero emissions vehicles in countries where they face financial penalties for not doing so.

The Federal Chamber of Automotive Industry (FCAI), of which Toyota is the most influential member, is advocating for weak standards. While they appear to welcome fuel efficiency standards, the devil is in the detail. If implemented, their standards would leave Australia’s car sector with some of the weakest carbon emissions rules globally.

The FCAI’s standards would mean new passenger cars sold in 2030 would still pump out an average of at least 98 grams of carbon emissions per kilometre. To put this in perspective, current European standards set a maximum of 95 grams of CO2 per kilometre. Further, the EU is banning almost all new petrol and diesel vehicles including hybrids by 2035. The UK is set to ban the sale of the majority of new petrol and hybrid cars from 2030.

What else can fuel efficiency standards do?

We have so much to gain by driving electric vehicle uptake in Australia:

Read more about why we love electric vehicles.

What else do we need to do to reduce Australia’s transport emissions?

EVs are an important piece of the puzzle, but we won’t achieve the deep emissions reduction we need this decade with EVs alone. To play our role in ensuring a liveable future and achieving the science-backed goal of net-zero emissions by 2035, Australia needs to embrace other clean, affordable and efficient ways to move around.

Boosting walking, riding, rolling and zero-emissions public transport will benefit everyone through financial savings at the petrol pump, reduced car traffic, cleaner air, less harmful emissions and better options when it comes to getting around. 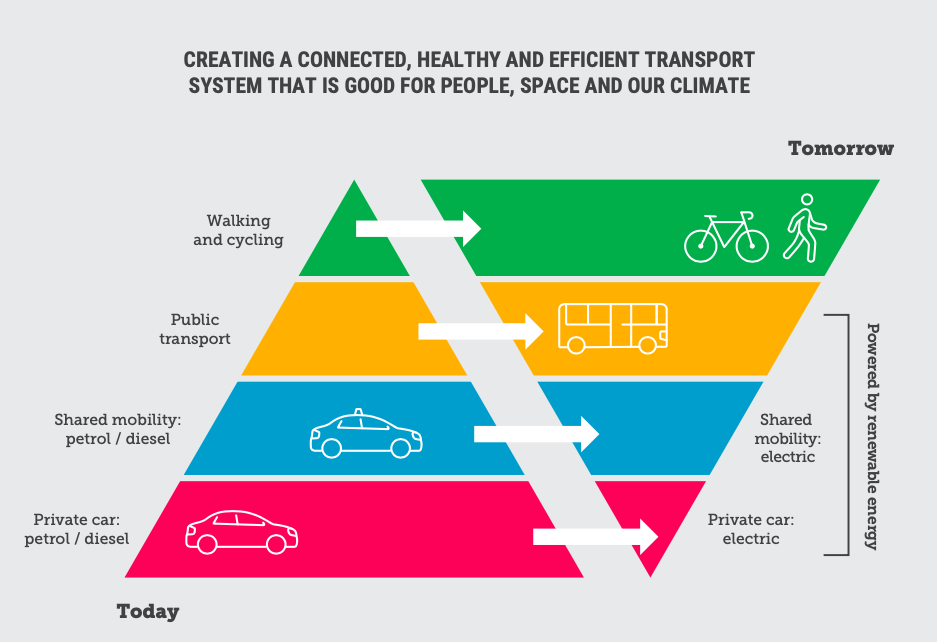 That’s why the Climate Council is calling for governments to:

1. Allocate 50% of state and territory transport budgets for public transport and 20% of the transport budget for initiatives that boost walking and bike-riding in line with best practice and the community’s needs.