11.03.20 By Lesley Hughes, Annika Dean, Will Steffen, Martin Rice and Greg Mullins
This content is more than 2 years old

Australia’s Black Summer of 2019-2020 was characterised by catastrophic bushfires. The bushfire season started in winter and was the worst on record for New South Wales in terms of its intensity, the area burned, and the number of properties lost. It was also the worst season on record for properties lost in Queensland.

The Summer of Crisis report is the first comprehensive overview of the devastating climate impacts Australians experienced this summer. It focuses on New South Wales and the Australian Capital Territory, because the effects of the bushfires were most severe in these areas, but we acknowledge that the bushfires affected Victoria, Queensland, South Australia, Western Australia and Tasmania. 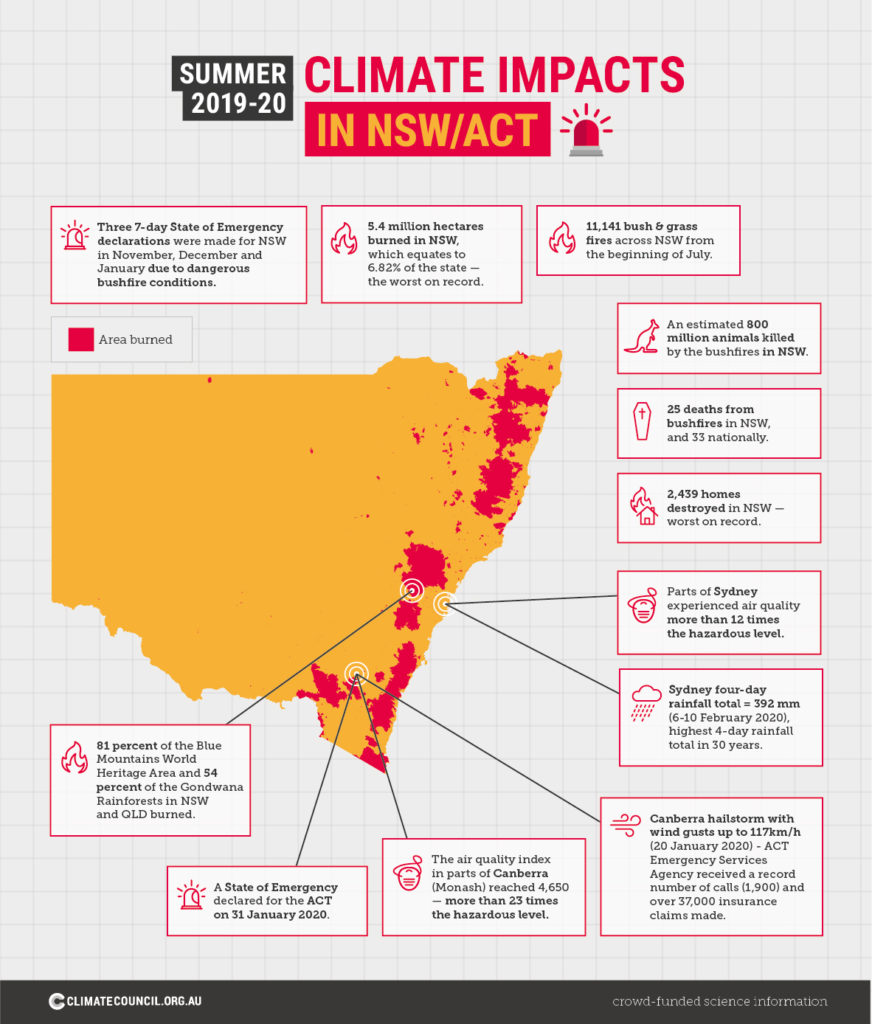 2. Australia’s Black Summer was unprecedented in scale and harm. The bushfire season was the worst on record for New South Wales in terms of the scale of the bushfires, the number of properties lost and the amount of area burned.

– The Gospers Mountain fire was the largest forest fire ever recorded in Australia, burning more than 500,000 hectares.

– This season’s fires were incredibly large in area, even compared to forests all around the world. Around 21 percent of Australian temperate broadleaf and mixed forests was burnt. The average annual area burnt for most continents, including Australia, is well below 5%, except for Africa and Asia, which have average annual areas burnt of 8-9%.

– Catastrophic fire danger ratings were experienced at locations and times of the year never before recorded.

– For the first time ever catastrophic fire conditions were forecast for Greater Sydney.

3. The bushfires are estimated to have spewed between 650 million and 1.2 billion tonnes of carbon dioxide into the atmosphere. That is equivalent to the annual emissions from commercial aircraft worldwide and is far higher than Australia’s annual emissions of around 531 million tonnes.

5. The summer of 2019-20 saw unprecedented climate impacts fuelled by the burning of coal, oil and gas.