What is climate litigation and how can Australians take action?

Find out about the fight for environmental responsibility happening in Australia’s courts.

Australia sits only behind the United States in the number of climate-related cases, despite boasting around a thirteenth of the population. This may have something to do with the fact that Australia, out of all developed nations, is one of the most vulnerable to climate change impacts. We’re already seeing the devastating effects of climate change with the relentless flood crisis and Black Summer bushfires. State and federal courts have become a new arena in the fight for climate justice.

Here’s a bit more about the Sharma case and its significance in this space. 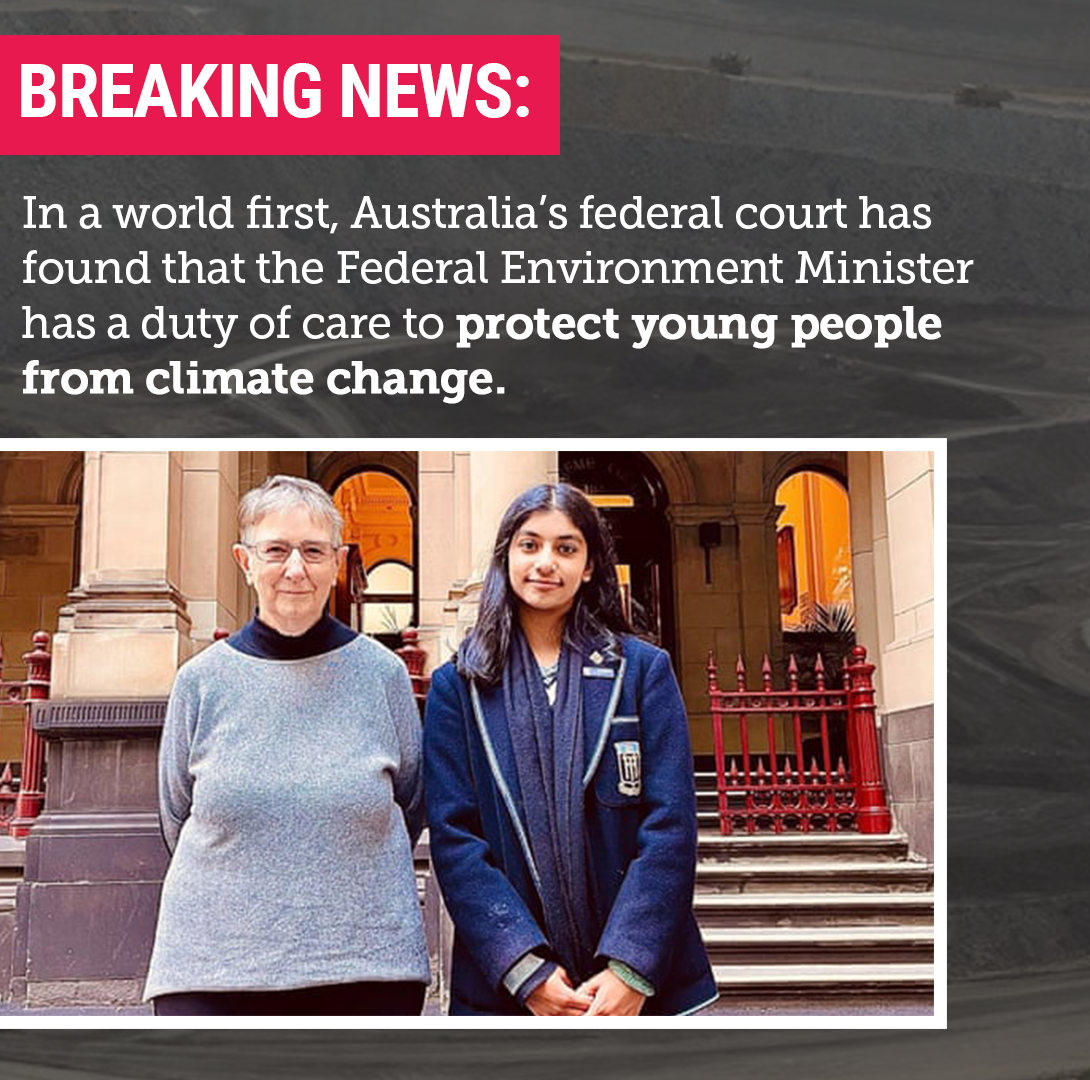 A case being brought against the Minister for the Environment for a future coal mine extension on behalf of eight children is already remarkable. However, what’s most unique is the children’s attempt to use negligence and a novel duty of care argument. Negligence principles are firmly entrenched in Australian common law and are readily able to accommodate the creation of a new duty of care. After a trial judge found in the children’s favour, the full Federal Court was unwilling to allow the original decision to stand. The legal issues are immensely complicated, and each of the three judges delivered separate reasons for their decision. While hope remains in a potential High Court appeal, the children’s case displayed the current legal system’s receptiveness to climate litigation and reinforced the need for compelling nuanced arguments.

Now let’s take a look at the three main climate litigation trends in Australia (the Sharma case actually combines two of them!)…

Like the Sharma case, this refers to citizens demanding environmental responsibility from the public office and has been in practice longer than the other two approaches. The Rocky Hill Coal mine case marked an Australian first, when our very own Climate Councillor, Professor Will Steffen’s expert testimony on climate ramifications of a coal mine were universally accepted. So strong was the argument, that the Chief Justice ruled the Australian judiciary system has a responsibility to mitigate climate change and refused the proposed mine on these grounds. Many following cases have cited this precedent or accepted climate science, even in Sharma.

“The role of extrinsic scientific evidence for litigation – whether it ends up successful or not – is a huge win in my opinion” – Climate Councillor and Senior Lecturer at Macquarie University, Dr Madeline Taylor, on the Rocky Hill case.

You might have heard about international climate cases winning on human rights grounds. While Queensland and Victoria have recently adopted human rights legislation, we are unlikely to ever see a federal Bill of Rights, making this line of argument shaky. The Sharma case displayed a creative way around this obstacle, and another inventive solution is unfolding in the Torres Strait. When erosion, coral bleaching and rising sea levels flooded their homes and decimated cultural sites, eight Islanders filed a human rights complaint against the Australian Federal Government to the United Nations. Such an action of a people against their home state is unprecedented and reflects other avenues for action.

“The causation and closeness of relationship between the Federal government and First Nations people may be argued to be stronger than that of the Sharma case of one sole minister and all future generations” – Climate Councillor, energy expert and Senior Lecturer at Macquarie University School of Law, Dr Madeline Taylor

In instances where government regulation appears difficult, climate advocates target a polluting organisation itself. These cases see large companies facing accountability for their project impacts, which can often play out in foreign courts. Very recently, First Nations people in the Northern Territory launched a legal campaign against the damaging Barossa offshore gas field pipeline in the Timor Sea. Being creative with their approach, the action is levelled at South Korean investors – in Seoul courts – which the project is relying on, and not the Australian developer Santos. While pinning corporate responsibility and disclosure on company directors themselves is difficult, this may be the next step in this trend.

The future of climate litigation in Australia is bright, but we shouldn’t rest on our laurels to wait for new legislation. By pushing the envelope now, we can fight for environmental justice and continue evolving the legal narrative to better consider the impact of polluting projects and their emissions.

“Australians, and Australian bodies are going to increasingly use climate litigation as a tool to mitigate climate change and respond to the climate emergency” – Climate Councillor and Senior Lecturer at Macquarie University, Dr Madeline Taylor.