Representing 110 different council areas from right around Australia, the Cities Power Partnership has supported and empowered communities to take action on climate change into their own hands.

Each member council has pledged a variety of different actions to reduce greenhouse gas emissions and transform Australia’s energy landscape, within the following categories:

We celebrated this exciting two year milestone with a birthday party and awards night, acknowledging the local heroes who are transforming Australia’s climate and energy landscape. Representatives from councils all over Australia got together to celebrate the incredible work being done at a local level.

Adam is passionate about developing and implementing projects that provide financial and environmental returns for Newcastle. From MW-scale solar projects and street lighting upgrades to electric vehicles and battery storage, he is focused on big reductions in carbon emissions for the city. Adam Clarke from the City of Newcastle holding his personal award for Climate Champion, and the council’s award for Sustainable Transport Achievement.

As a world leader in action on climate change, the ACT Government’s Next Generation Energy Storage (Next Gen) program supports the roll-out of up to 36MW of solar battery storage in up to 5,000 homes and small businesses, with around 1,200 installed to date.

The Next Gen program, with its smart requirements, enabled a world-first virtual power plant, grouping together individual solar battery systems to sell energy back to the grid when it’s needed most.

Is your local government council signed up the the Cities Power Partnership? Click here to find out!

So far the scheme has delivered 1.3 million energy-saving solutions to 74,000 households and businesses, which is nearly half of Canberra households, including more than 18,500 low-income households. Residents are expected to save $360 million off their energy bills over the lifetime of energy saving items installed.

In anticipation of a carbon tax, Blue Mountains City Council had built a reserve of money to contribute towards future liabilities for landfill gas.

When the carbon tax was scrapped, the council identified that lack of funding was a key barrier in getting carbon reduction projects underway. So, they used the reserve money to create a $1.6 million dollar Carbon Revolving Reserve, which is a special fund set up to finance renewable energy and climate projects.

The Carbon Revolving Reserve has so far contributed $1.7 million dollars towards energy efficiency and renewable energy projects, delivering combined annual savings of $300,000 and attracting $300,000 of grant and co-funding. 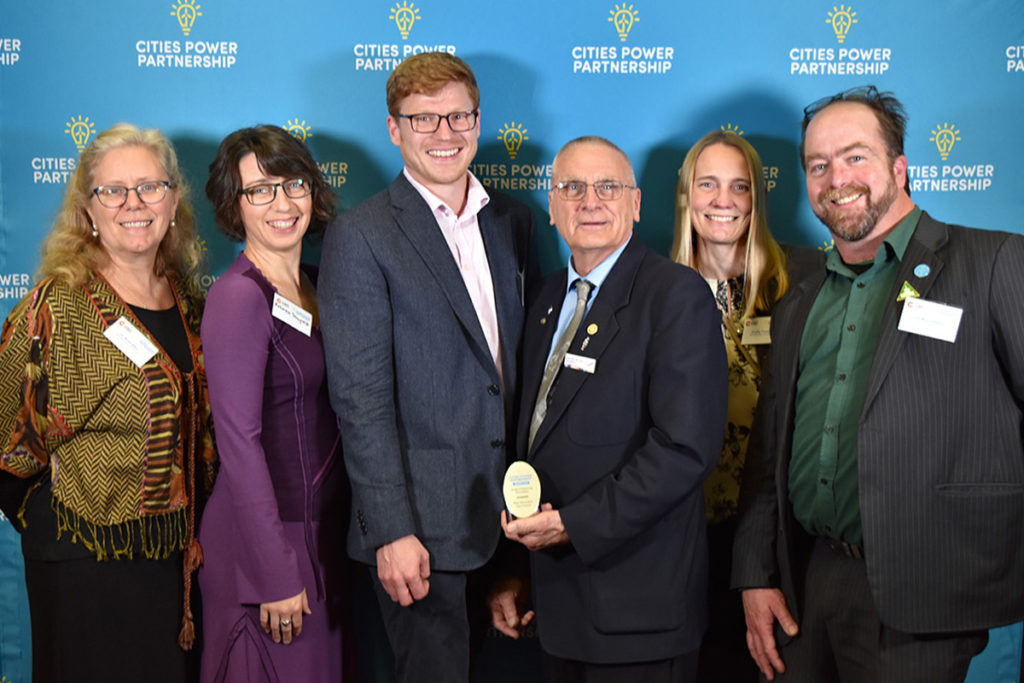 The representatives from the Blue Mountains City Council, accepting their award for Project Financing Innovation, 2019.

The City of Port Phillip, together with Albert Park Kindergarten, have worked together to achieve huge results in sustainability, becoming the first certified carbon neutral Early Childhood Education and Care Service in Australia. The kindergarten, with support from the council, has reduced their gas use to zero, cut electricity consumption by 59%, water by 71% and waste by over 50%.

As the driving force behind an ambitious plan to take Noosa Council to net-zero emissions by 2026, Tony has been a tireless advocate for local government climate action, in his shire and beyond. Congratulations to all our winners, and to everyone who entered this year’s awards. Together, we’re transforming Australia’s climate and energy landscape.

Chip in to support local action on climate change today.